Harwich’s Labour TDC councillors have met with council officers to seek further assurances over the use of the £100,000 of S106 funding generated by the Capital House development in Dovercourt. Concerns were raised recently when a list of S106 allocations was issued and this particular contribution was shown as being allocated towards an ‘affordable housing’ project in Clacton.

At a meeting in Harwich on Wednesday, assurances were given that the sum in question was no longer allocated for the Clacton project and is available to be used in the Harwich area. The money can only be used for the provision of affordable housing and must be used before December 2015.

Harwich’s Labour councillors made it clear that they want the money spent on a project in the Harwich area and that they wish council officers to actively seek a local project for this purpose.

Cllr. Dave McLeod, who raised the issue at a meeting of TDC, says, “It is good to know that the £100,000 is still available to be spent on an affordable housing project in Harwich. It’s a shame that the legal agreement limits the use of the money to this specific purpose but the important thing is that it can still be spent in Harwich.”

The Capital House development is in Harwich East Central Ward and the two ward councillors, Dave Mcleod and Garry Calver, were also assured that they would be consulted on the use of the funds prior to the money being allocated to a project. Ward councillors are entitled to be consulted although they do not have a veto on the use of S106 funds and do not have the final say on how such funding is allocated.

Cllr. Garry Calver says, “Dave and I made it absolutely clear that we would oppose any use of this money outside of the Harwich area. We understand that the £100,000 can only be used for affordable housing and that at present there is no identified project in the Harwich area that meets this criteria. We have asked officers to actively seek such a project in the 14 months available.” 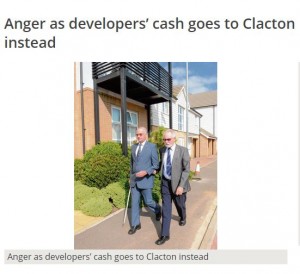