HARWICH Labour councillors are calling for villagers to throw their weight behind the Standard’s A120 campaign as it gathers momentum.

The campaign to get the Government to pay to dual the A120 from Hare Green to Harwich has been signed by more than 900 people.

Harwich and North Essex MP Bernard Jenkin, Tendring Council and Harwich Town Council are all on board with the petition along with lorry drivers and residents.

But councillors at Harwich Town Council’s meeting last Tuesday night urged villagers in the area to sign the petition so it will keep gathering momentum.

Councillor Ivan Henderson said: “We have got the MP on board, Tendring Council, and we will have Highways England on board.

“We have never been to this stage before with the campaign and we must remember the reason why we are behind it.

“We are behind it because the road it at the end of its life and we need to reach out to the villages so more people sign the petition.

“The campaign is gathering momentum and now we need the weight from the residents to get behind it.”

Councillor Dave McLeod said he was glad Tendring Council has agreed that the A120 needs to be duelled as a matter of priority.

He said: “The road is breaking up and spreading out and it’s not fit for purpose.

“Sooner or later there will be an accident.

“This is an entrance to the east coast and it’s a major port so why don’t we have a dulled road?

“We want to fight for the safety of our residents.”

Councillor Garry Calver said: “We have got to keep the pressure up.”

To sign the Standard’s online petition calling for the Government to fund dualling the A120 from Hare Green to Harwich visit-> petition.parliament.uk/petitions/221123 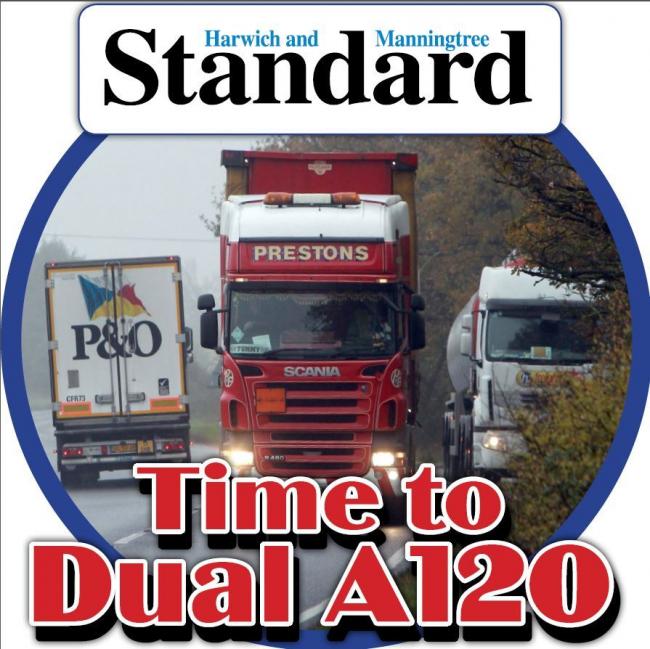