A march through Dovercourt is being organised to show public support for keeping our full time firefighters at Dovercourt Fire Station.

A series of proposals have been put out to public consultation by the Essex Fire Authority and all of the options would remove the full time firefighters from our local fire station. Whilst no-one denies that volunteer, retained fire-fighters do a great job it is impossible for them to provide the level of cover or speed of response necessary to ensure the safety of those living and working on the Harwich Peninsula in the event of a fire, road accident or incident. Fire-fighters know that the first 10 minutes are vital if someone is trapped by a fire and these proposals would mean that there would be times when the Harwich Peninsula is 20 minutes from its nearest fire engine.

Harwich Town Councillor, Ivan Henderson, says, “There has been tremendous support from local people for keeping our full time fire-fighters but we are still not convinced that the people who matter are listening. The march in Dovercourt will offer a timely reminder that we are taking this matter very seriously and those making the decisions need to listen. This could genuinely be a matter of life or death.”

The march is being arranged for Saturday, June 4th meeting in Cliff Park at 10AM and moving off at 10.30AM. The march will pass through Dovercourt High Street and along the Main Road to the Upper Dovercourt war memorial where it will turn into Fronks Road and end in front of Dovercourt Fire Station.

“Some people have tried to politicise this campaign by attacking the Labour Party but this is not about politics,” continued Ivan Henderson. “A fire doesn’t ask which way you vote before it traps you. We hope that everyone will join the march to show their support for our full time fire-fighters and the fantastic job that they do.” 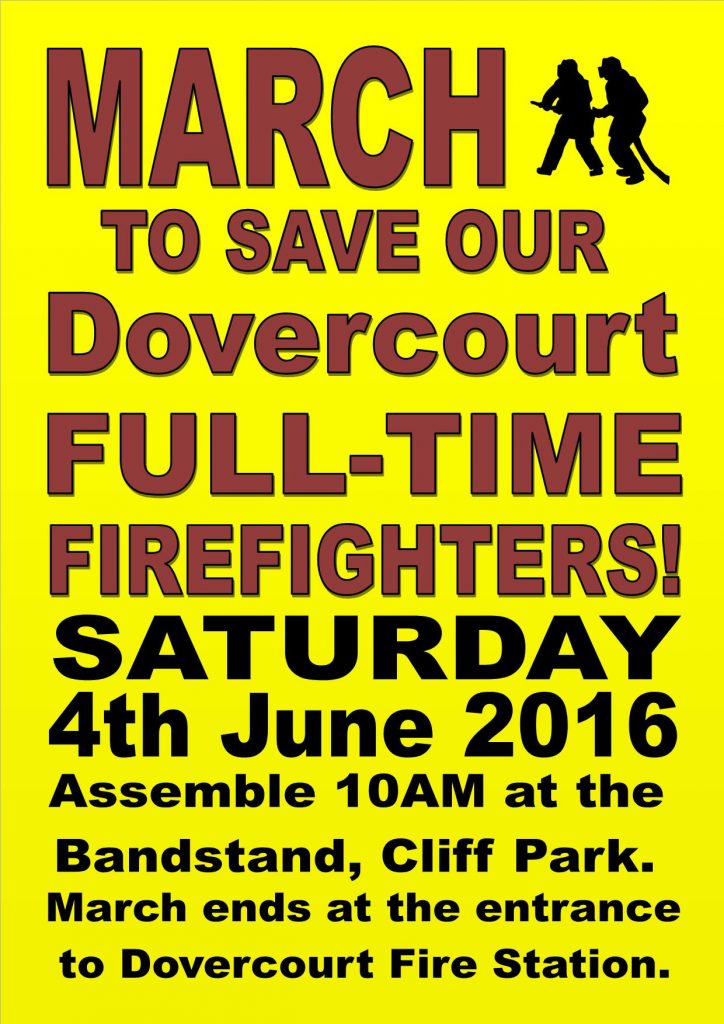